London is well known in the culinary scene to be a city with a couple of Michelin starred restaurants and another handful more of fine dining restaurants scattered throughout. Heard overwhelming reviews of Duck and Waffles and we decided to make a reservation.

The entrance was very exclusive with a doorman checking in on your reservations and attire. The restaurant has a smart casual dress code and strictly no running shoes policy. Located on the 40th floor, the lift ride has some pretty views of London city

The moment you enter, a beautifully lit bar with comfortable lounging chairs and table will greet you. This area is for guests to have their pre-dinner cocktails or guests who arrived earlier than their reservations to chill out

The restaurant is quite dark and softly lit with yellow ceiling downlights. The entire dining area is quite packed with tables and the distance between tables was quite small and impersonal

There were also side tables next to the full length windows throughout the entire restaurant for customers to dine with a view. 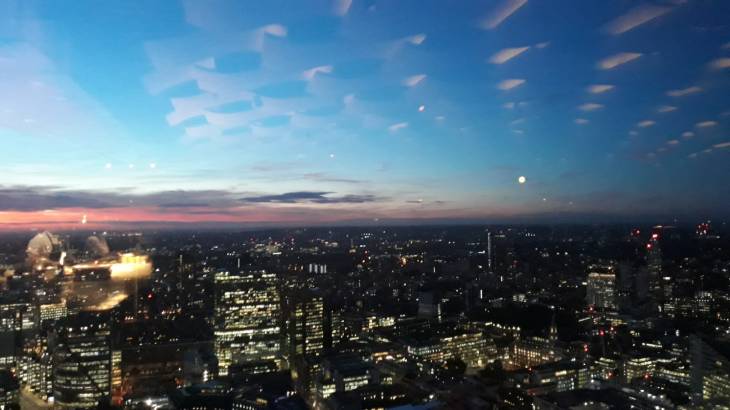 If you book for dinner around 6, you might catch a beautiful sunset hue in the sky with the wonderful night skyline of London.

The menu had a nice ancient letter with a wax stamp look.

The menu had basic British and European fare served at a pricey tag.

We had the seared Octopus with yellow lentils, fennel and green sauce at £12. The serving was not too big and plating was great. The octopus was lightly seared but quite overcooked with certain parts quite tough and the sauce had very heavy Indian spices which was overpowering the sweetness of the seafood.

The foie gras creme brulee came with pork crackling and marmalade brioche bread was about £18 or 20. The foie gras was very smooth with the crackling sweet sugar crust on top. The brioche bun was very soft but we were not sure how we were supposed to eat this dish. Foie gras on bread or each on it’s own? We would have appreciated if the server told us how to consume the dish. Worse thing is that at the end, I found a strand of hair on the dish!

The oven baked cod at £38 was a big enough portion for 2 to share. The fish was fresh but does not leave an impression and is quite mediocre.

The star of the restaurant the duck confit with waffle and egg was priced at £18 and was pretty much the only dish that was pretty nice. The duck was pan fried nicely with a crispy skin and the waffles soft and buttery. However, would I come back for this? Probably not.

Overall, the food is mediocre and definitely not worth the money. What really sells here is the view and atmosphere which is great for special occassions

One of the more famous and popular hotel in Singapore for tourists and locals, the MBS hotel completes the beautiful skyline. Read on for the full review
One year has past without travelling. Looking back on these precious memories and hoping the day will come soon when I can step on foreign lands again to create new memories. #throwback #misstraveling #elizbeartravel #wanderlust
When you can't travel for Christmas, lights on display does gives a similar cheer.
Time for some shake shack.. look out for the review
Check out my first attempt at making and editing a cooking video.. subscribe to my channel as I hope to add more videos to the channel
Missing days of travelling and having gorgeous meals like this
×
Loading Comments...
Comment
×
%d bloggers like this: