Seoul is one of my favourite cities in Asia for non stop shopping and dining. While this might sound like the tagline of many Asian countries, Seoul has slightly more to offer where the historic and the modern has come to co-exist together. Most of the Asian cities have their historically buildings all clustered in one area but in Seoul, you can see them all over the city. This is great as we live our daily lives but not forgetting the ancient cultures and history of the country.

Day 1: Blast to the past 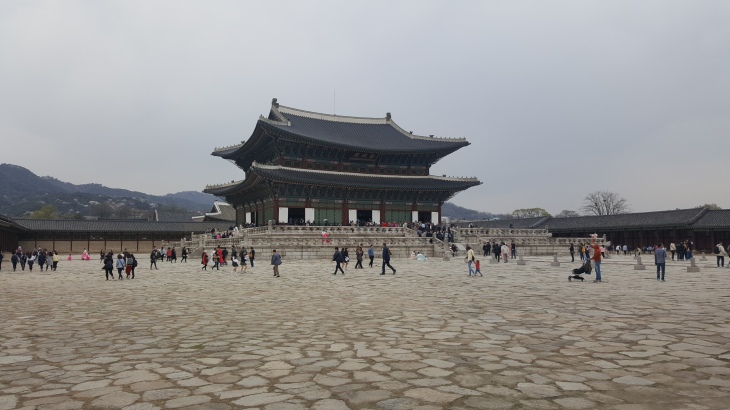 For many Korean drama fans who’s first ancient drama is Dae Jang Geum ( Jewel of the Palace), you would have been intrigued by the entire palace setting and costumes. Now you can be part of it! You can rent a Hanbok ( traditional costume) for a period of 4 hours for 20,000 won or a full day at 28,000 won ( SGD 35 ) The rental comes with basic accessories but any other accessories will come with a price. The studio I visited is Seoh Wah hanbok and it is really near Gyeongbokgung about 1 min walk away. You can even book a photographer to take really legit photos of you in the palaces and be your own protagonist of a drama for a day. You can find out more about Seoh Wah Hanbok here on how to book your Hanbok session. 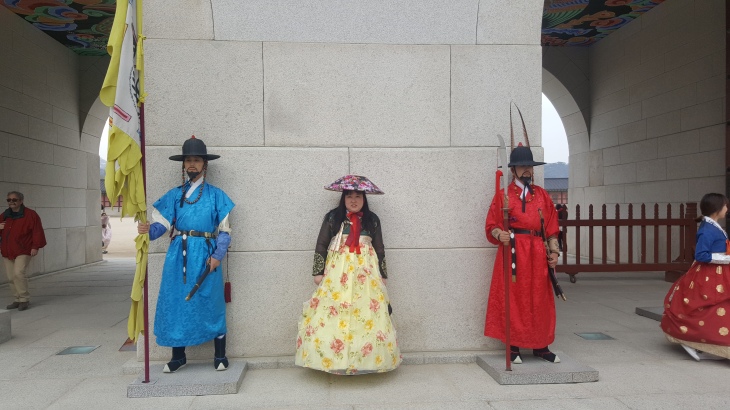 So why dress up in a Hanbok? The good news is that all the palaces offer free entry into their premises to people wearing the Hanbok ( the entry is about 3,000 won ) so the more palaces you visit, the more the cost of the Hanbok rental is amortised.

Gyeongbokgung is the main royal palace in the Joseon dynasty. The palace is located right at the heart of Seoul as the auspicious location. The Palace was named Gyeongbokgung Palace, the “Palace Greatly Blessed by Heaven.” With Mount Bugaksan to its rear and Mount Namsan in the foreground. 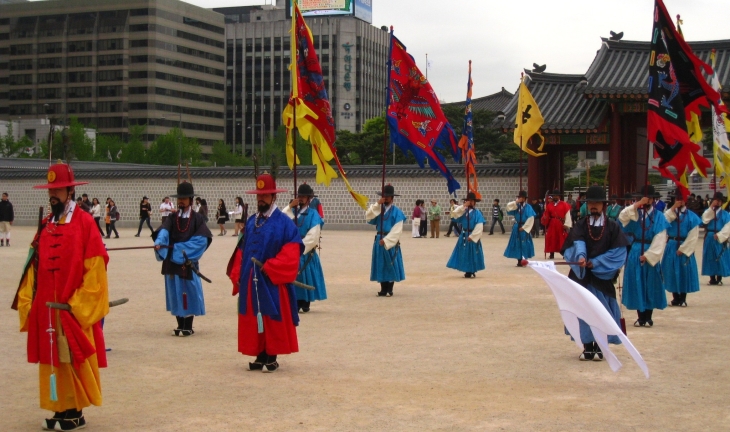 Other than taking various pictures within the palace, one highlight is the guard changing ceremony. The Royal Guard-Changing Ceremony is a great opportunity to experience a rare traditional scene in Korea. Be sure to bring a camera to take lots of pictures. The guards’ splendid costumes, with their brilliant primary colors, are a real pleasure to see. There are various timing for the ceremony, for the one at the main gate, be sure to head over at 11 am or 1 pm.

How to get there: Gyeongbokgung Palace Station (Seoul Subway Line 3), Exit 5

After spending about 2 hours at Gyeongbokgung, you can have an early lunch at the famous Tosokchon restaurant which is near to Gyeongbokgung. 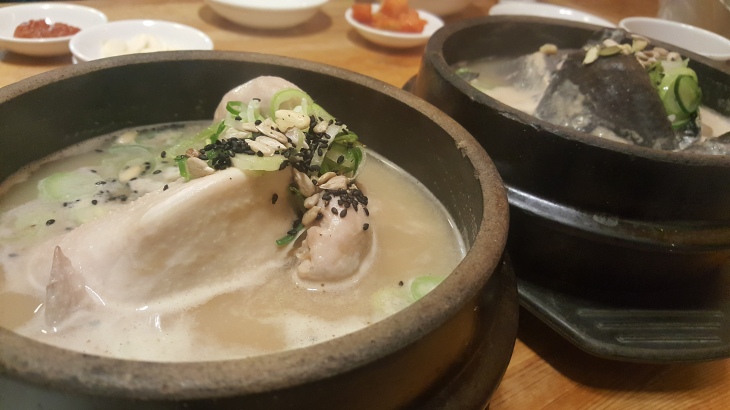 Fuel up with lunch and a hot delicious soup for more energy to continue the walking for day 1. Check out my full review of this restaurant here.

After lunch, head over to Bukchon Hanok Village which is the traditional Korean village.

Buchon Hanok Village is a Korean traditional village in Seoul with a long history located on the top of a hill between Gyeongbok Palace, Changdeok Palace and Jongmyo Royal Shrine. The traditional village is composed of lots of alleys, hanok and is preserved to show a 600-year-old urban environment.

The main alley with the best view is generally very crowded so the recommendation is to go early. The entire village is an upslope walk and you can take your time to admire the ancient architecture of the buildings which are still very well maintained. Today, the houses here are all sitting on very expensive land.

There are many traditional houses where you can take multiple pictures for your Instagram. As the neighbourhood is still a functioning neighbourhood where people still live, you can spot many signs for tourist to keep the noise level down and be considerate to the residents. There are also some traditional houses being converted into tea and coffee appreciation houses and stores selling Korean snack and souvenirs.

From Buchon Hanok Village, you can walk over to Samcheongdong which is an extension of the traditional village with local indie boutiques selling crafts and gifts, and dining options include quirky al fresco cafes and laid-back Korean eateries. 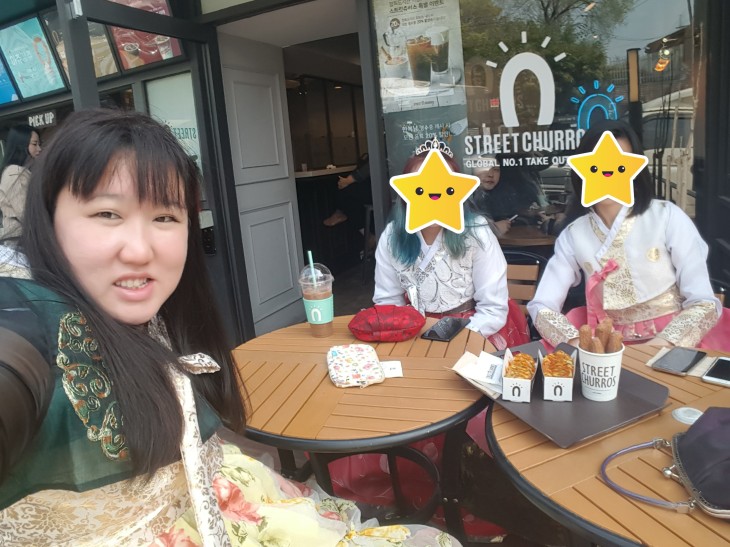 After catching your breath and having your coffee intake, you can now head over to the secondary palace Changdeokgung. 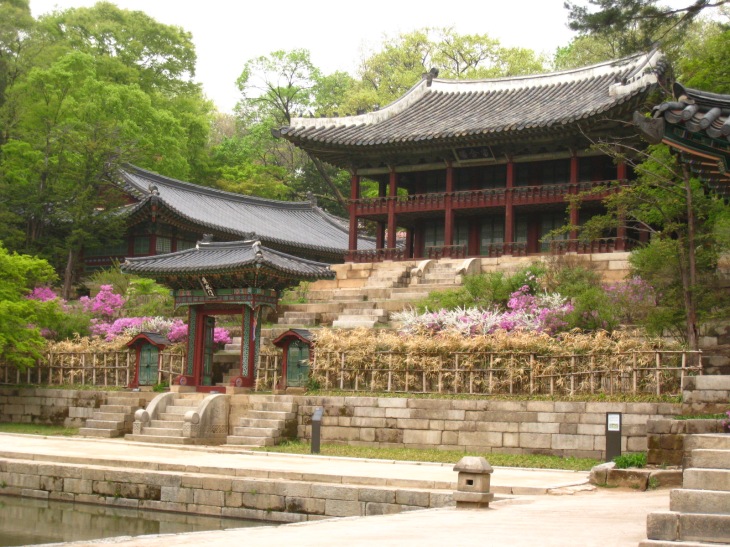 Changdeokgung, also known as Changdeokgung Palace or Changdeok Palace, is set within a large park in Jongno-gu, Seoul, South Korea. It is one of the “Five Grand Palaces” built by the kings of the Joseon Dynasty. The buildings and pavilions of Changdeokgung, located at the foot of a mountain, were positioned naturally, following the contours of the land. This created a more relaxed almosphere, while maintaining the dignity of a royal palace.

The highlight of this palace is the tour of the secret garden which covers two thirds of the total ground of the palace. The rear garden was constructed during the reign of King Taejong and served as a resting place for the royal family members. The garden was kept as natural as possible and was touched by human hands only when absolutely necessary. The tour of the secret garden is only possible with a guided tour and cannot be done free and easy. This is mainly for the safety of the tourist. The entire garden has multiple halls, pavilions and stone tables which looks entirely transported from the past and untouched by the modern civilisation. Take time and absorb the natural beauty of this garden and put yourself in the shoes of the residents of the palaces hundreds of years ago.

How to get there: Anguk Station (Seoul Subway Line 3), Exit 3. Walk straight from the exit (towards east) for about 5-min to arrive at the palace entrance.

By now, it should be evening so you can return your Hanbok and head over to Insadong for some shopping and dinner.

To find out more about what you can find at Insadong, you can read the following post. If you still have energy, you can head to Dongdaemum for more shopping late into the night.

Get a good rest for a full day itinerary on Day 2.