Busan is the next most populated city in Korea after Seoul. Located at the South Eastern area of Korea, it’s port is the busiest in Korea. Just next to sea, Busan is famous for it’s beautiful beaches and many Seoulites come over to Busan for weekend getaways at the beach as well as their fresh and delicious seafood. 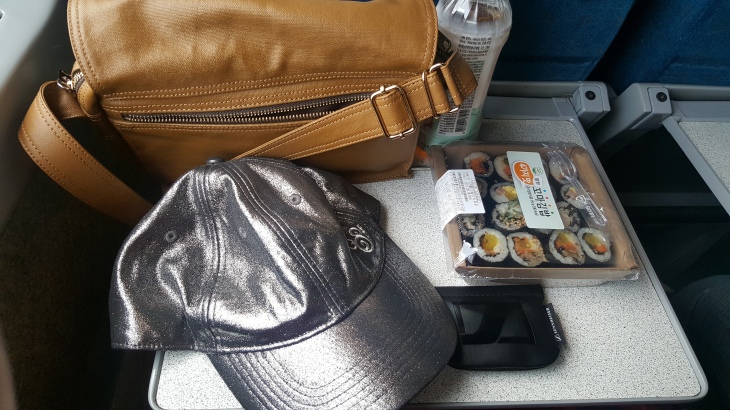 The journey to Busan starts as early as 5.15 am from Seoul station and takes about 2.5 hours with a return ticket costing 119,600 won ( SGD 146.36 ). With every train ride, you always need to buy the train bento sets available within the stations. Other than Japan, Korea has one of the best train bentos available.

One of the main attraction of this village is the colourful houses built on the hill in a staircase manner. On a sunny day, the village is filled with the bright and vibrant colour reflecting from the houses in different colours.

The other highlight of the village is the various interesting buildings that are filled with character. Just like this souvenir shop and café that looks just like a building from a fairy tale.

Each and every alley is filled with interesting and beautiful wall murals like the ones above. The steps are painted into books and the top of the stairs is a library. Street art is huge in Korea and you can see some really great ones here at Gamcheon

It is recommended to take a slow and relaxed pace to take in the sights of the village as well as really take the time to enjoy the view in front of you. There are many little cafes dotted around the village. We found one which is decorated in a old school manner and even the desk looks like the ones we used in school.

Haeundae beach is 1.5km long and is one of the most beautiful beach in Korea. There are many restaurants along the entire stretch of the beach with many beach activities and sun deck chairs all around. 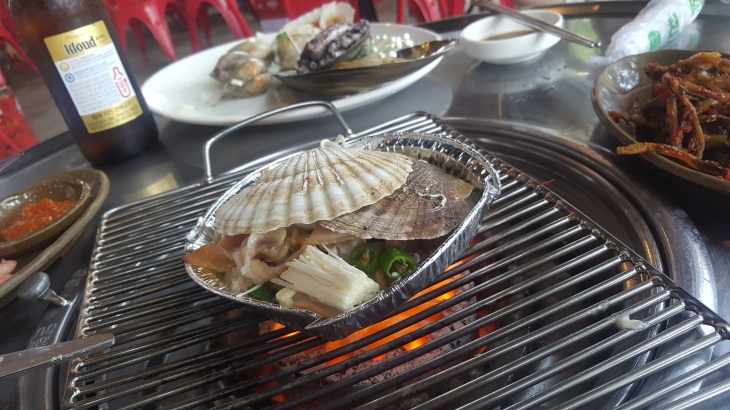 We chose the quieter stretch of Haeundae beach and had our late lunch here at Sumininae restaurant. The restaurant is very well known for grilled eel as well as grilled clams.

We order both the famous items on the menu. The clams will be served first and the Ahjumma will serve you by helping you with the grilling of the clams. The gigantic clams and mussels are first grilled lightly on the grill till the juices seeped out onto the shell after which she will cut out the meat and pour the juices together with onions onto an aluminium bowl and leave it on the stove to continue cooking. You can start to eat once the juices start boiling in the bowl. This is the best grilled seafood I ever had. The seafood was so fresh and natural since there was zero seasoning added. It was cooked in the pure sweet juices coming from the seafood itself.

The eel on the other hand was not as enjoyable as I hope it to be. The meat is still springy and very fresh as they kill the eel only after you put in the order. As the restaurant got busier, we were left to cooking the eel ourselves and I feel that affected the taste since we did not know when it is cooked. We might have over cooked the eels but it is still a very nice meal.

We took a cab to Sumininae restaurant and communicated with the driver with google maps. 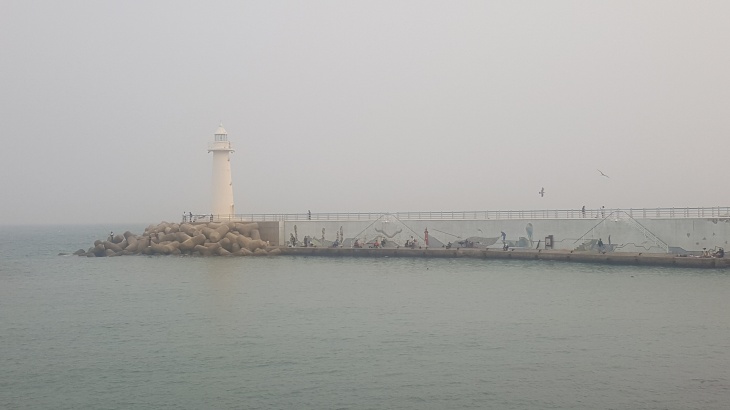 With the direct view of the sea from the restaurant, we took a walk around after the meal and there is a very nice lighthouse and bridge just nearby.

There are also some very nice cafes along the streets and will be nice to spend the evening. As we only have less than 48 hours in Busan, we had to proceed to our next destination.

BIFF Square is an open pedestrian street filled with food carts and rows of shops and cafes just like Myeongdong in Seoul. This is where I found the best hot deok in Korea in my opinion. A pity i didn’t take a photo of the stall. It is very nice to take a stroll and look at the shops offering unique wares and also fill up your tummy with many local yummy street food.

Japan has Tsukiji market , Seoul has Noryanjin fish market and Busan has their own Jagalchi fish market. The biggest fish and fresh food market in Busan, you can find all kinds of seafood, fishes, vegetables, kimchi and fermented spices here. Come early and you can enjoy being part of how the local spend their daily mornings.

Nestled within the market you will also find many seafood restaurants like this with many huge tanks right at the door step of the restaurant offering fresh seafood for your meal. You will get many love calls from each of the restaurant owners to step into the restaurant to try their food and some will even shout out very attractive prices to lure you

Plenty of live octopuses for sale at the market for Ahjumma to buy home. I just wonder how they will bring the live octopus home.

They have dead ones available as well and they are really huge.

We hopped into one of the many restaurants scattered across the market to have our lunch. We had grilled fish, fresh live seafood spicy soup which comes in a huge pot with so many different kinds of seafood that just this pot alone was extremely filling. The soup was basic with Korean paste seasoning but what made it so sweet and good was the plentiful of fresh seafood like clams, mussels, squid, fish, scallops and octopus. The price was also very reasonable. ( I can’t remember the exact cost but it was definitely between SGD 40 – SGD 70 )

Through very basic English, we managed to order stir fry live spicy octopus. You can see them in action above. The octopus was very crunchy and the entire dish totally paired so well with white rice. Our restaurant was opened by a family and they were extremely friendly and only the daughter in law spoke very basic English. It is a pity I did not get the name of the restaurant. We travelled to the market in a taxi and it the fare was very cheap and affordable.

Operating hours: Some stores start to close around 1-2 pm and others later 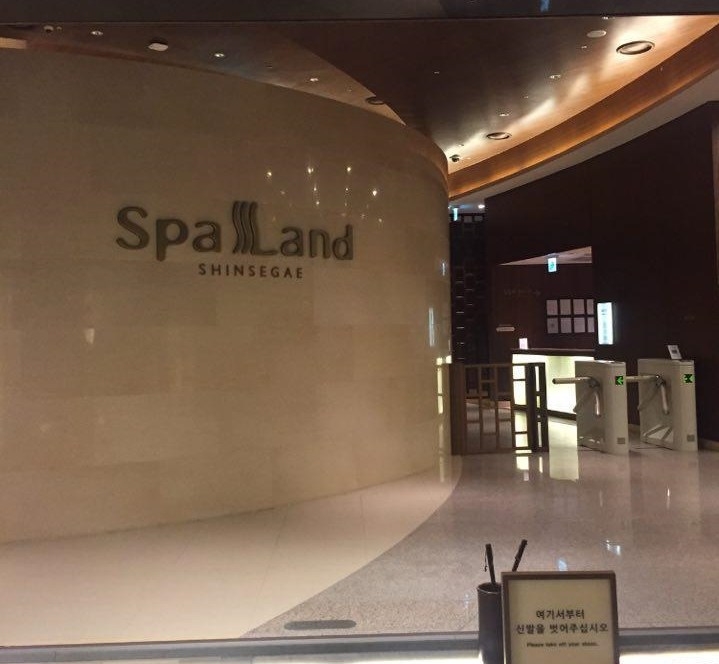 After a hearty and satisfying meal, we decided to head to Shinsegae Shopping Mall for some shopping but we ended up in Spa Land. Spa Land consists of 22 spas fed by two different kinds of all-natural spring water pumped up from 1000m underground, 13 distinctively themed ‘Jjimjil-bangs’ and saunas, and an open-air foot spa. After paying for the entrance fee 15,000 won for 4 hours ( additional 3,000 won for additional hour), you will get a tag for your shoe locker as well as bigger locker for other belongings. You will also be handed loose sauna clothing where you can change into after all the soaking in the spa. Just like Japanese Onsen, no clothes or swimming costumes is allowed in the spa. 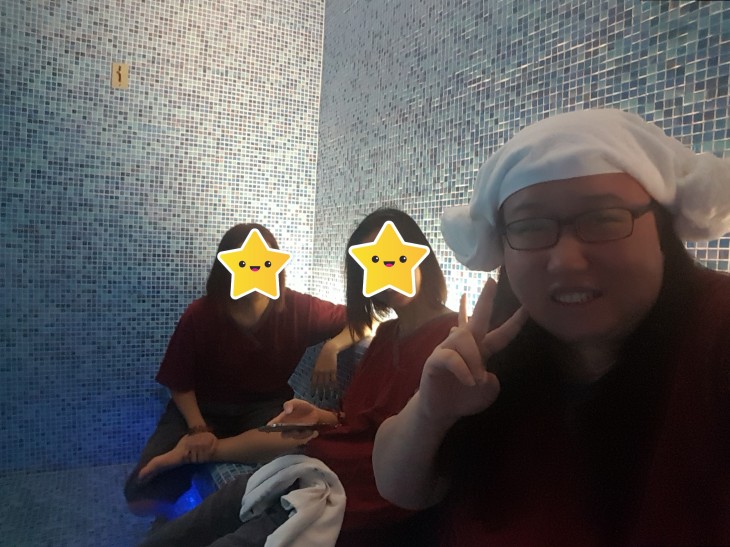 The 1st floor houses the Korean traditional ‘Jjimjil-bang’ and traditional saunas from all over the world. Some of the favorites include a radiant heat-based ‘Roman Sauna,’ which recreates the ancient roman bath using modern technology, and the traditional ‘Finnish Sauna,’ which is an all-natural, Finnish-style sauna that keeps you healthy during the freezing winter months. There is also a freezing cold room for you to cool off after all the hot saunas. 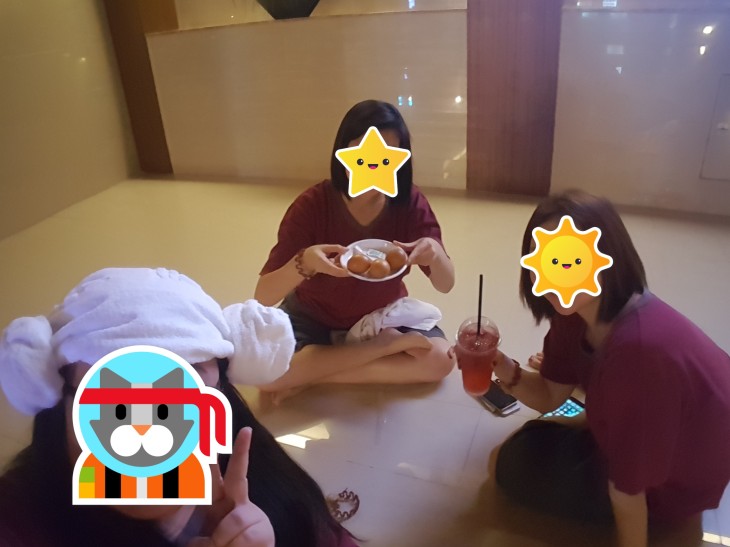 When in a Korean sauna, you definitely have to do what you see in the dramas. Sheep towel hat, hard boiled eggs and cool barley tea.

Entertainment Zone on the second floor provides a range of beautification programs, a PC room, a restaurant, and a conference room. After taking our rest in the movie theatre with individual massage chairs and TV screens, we decided to have our dinner in the restaurant within spa land as they served some pretty decent Korean meals like this tofu seafood soup.  As we bought the tickets back to Seoul for the evening train, we left straight for the train station after spa land.

Last thing you need to do before heading back to Seoul is to drop by this largest fish cake producer for Korea, Samjin Fishcake bakery. They have recently opened an outlet in Singapore ION mall. Established in 1953, Samjin is the oldest fish cake maker in Busan. For our convenience, there is one outlet right at Busan station so we could buy the different kinds of fish cake and eat them on the train. There are at least more than 20 types of fish cake goodies sold in the stall and you can tell by the crowd how popular it is amongst Koreans. Some of the popular ones are the traditional fish cakes or the modern battered fried ones stuffed with fish paste. You have to try it to know why this simple snack has stolen all Korean’s hearts.

Because we had less than 48 hours in Busan, we missed out on some of these other sights I would have liked to visit but would still like to recommend to you

Haedong Yonggungsa Temple is situated on the coast of the north-eastern portion of Busan. This superb attraction offers visitors the rare find of a temple along the shore line; most temples in Korea are located in the mountains. Haedong Yonggungsa Temple was first built in 1376 by the great Buddhist teacher known as Naong during the Goryeo Dynasty. Other special sites at the temple are the 108 stairs and stone lanterns lining the rocky landscape. After going down the 108 steps, one will be delighted with the beauty of the temple. Midway down the 108 steps one can stop and enjoy the calming sounds of the waves, and view the majestic sunrise ( source: Visit korea.co.kr)

Operating hours: 5 am to sunset

Oryukdo Skywalk was originally called Seungduma as well as Jallokgae by the residents and local women divers as the shape resembles a saddle. The skywalk is regarded as the dividing point between the East Sea and the South Sea and is often referred to as walking over the sky. The sea stretches out ahead of the skywalk, perfect for photos, as well as the best spot to see Daemado Island on sunny days.