When in Klang, there is only one thing you cannot miss eating and that is the famous Bah Kut Teh at Seng Huat which is also lovingly known as under the bridge Bak Kut Teh. Back in the days, Seng Huat used to sell their famous dish under the bridge and the locals named it under the bridge. As one of the first few stalls to start selling the dish, the Seng Huat version of the dark herbal soup is supposed to be the best in Klang. Unfortunately, when we docked at Klang, it was past noon and Seng Huat was already closed.

Since we were already in Klang, we had to get our Bak Kut Teh fix and got the local taxi to drive us to the next best available restaurant to satisfy our cravings. Our driver brought us to this Bin Hai Bat Kut Teh which is one of the last few to stay open as it seems like most of their stores here open for breakfast only. The restaurant is in a small coffee shop amongst a row of shophouses.

I spotted this award plate hanging proudly above their kitchen door saying 2016 Klang Top 10 popular choice. We ordered a couple of straight forward choices just to hit the craving. 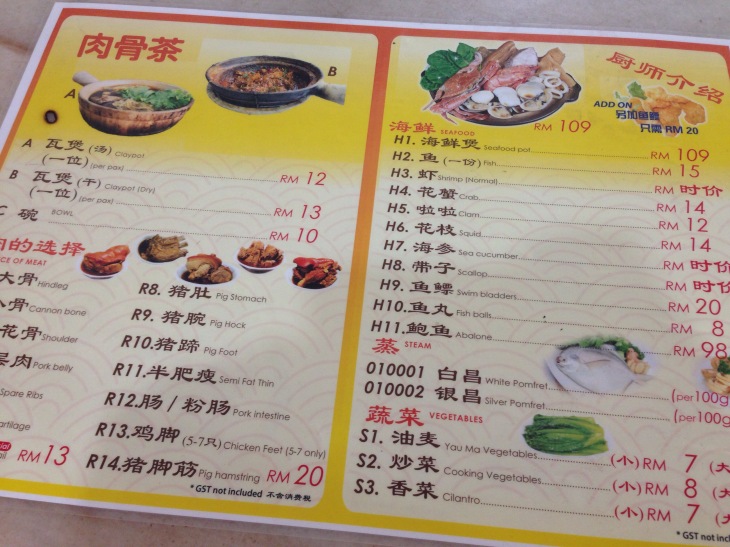 You can order from the pot per number of people consuming and also choose to add additional ingredients on the menu. You can also have a pure seafood pot.

The soup came in a big clay pot like all Malaysian bak kut teh with huge pieces of beancurd skin. Most of the meat was meaty pork ribs, very tiny bit of enoki mushroom and some pig stomach. I had wanted to add on pig innards like liver, kidneys but unfortunately, they do not have it. The herbal taste was very strong and the soup consistency was very thick and flavourful. The meat was well cooked although slightly tough. I think there was a generous amount of msg added as I was very thirsty after the meal.

We also ordered the dry version and I found this dish very delicious and complemented white rice very well as the sauce was full of dark sauce flavours as well as a light spicy kick from some of the chilli used to fry the dish. The meat has also absorbed the sauces very well and is flavourful even without the sauce.

To balance the meal, we ordered the stir fry lettuce which was crunchy and fresh and lightly flavoured with fried garlic and soy sauce.

Overall, the meal managed to satisfy our bat kut teh cravings but is definitely not one of the best ones around. We had even better ones closer to Kuala Lumpur itself so it was quite unfortunate that we missed the Seng Huat one. Personally, I think they made the dry version much better. To be fair, they are unique for their seafood bak kut teh which we did not order.

One of the more famous and popular hotel in Singapore for tourists and locals, the MBS hotel completes the beautiful skyline. Read on for the full review
One year has past without travelling. Looking back on these precious memories and hoping the day will come soon when I can step on foreign lands again to create new memories. #throwback #misstraveling #elizbeartravel #wanderlust
When you can't travel for Christmas, lights on display does gives a similar cheer.
Time for some shake shack.. look out for the review
Check out my first attempt at making and editing a cooking video.. subscribe to my channel as I hope to add more videos to the channel
Missing days of travelling and having gorgeous meals like this
×
Loading Comments...
%d bloggers like this: