For those visiting United Kingdom the first time, I am sure everyone would be planning to visit the Stonehenge to see the mystic stones for themselves. Stonehenge is located in Wiltshire, England which is close to 2 hours drive by car. There are many tours that will bring you to the Stonehenge from Central London. For those who like to take in the sights at your own pace, you can take a train from Waterloo Station to Salisbury (1h 20mins) and from Salisbury, take a tour bus to the visitor center of Stonehenge.

For others like me who prefer the convenient of a tour, I took the tour from England Experience which includes Stonehenge, Bath, Lacock and Avebury. The tour itself costs £73 per person and lasts close to 12 hours.

The pick up is from 126 Brompton Road at 8.15 am and the nearest station is Knightsbridge about 6 minutes walk away. The pick up location is the entrance as outlined in blue. From Knightsbridge station, take the left exit and walk about 6 – 10 mins and you will see this across the road. You can wait at the Cafe Nero or just standing around the area for the guide to pick you up. The guide will make sure everyone is here before leading you to the bus which is parked at one of the smaller streets.

The bus that we took was a 12 seater tour bus which is small enough to be private yet big enough to be comfortable for the long drive.

The guide is the driver at the same time and water is provided for all the customers on the tour. The guide also gives very interesting commentary about the tour as well as some of the building of London as the bus drives past. It takes close to 2 hours to reach Stonehenge so you can catch twenty winks even though the guide continues with his commentary throughout the tour.

Once the bus arrives at the visitor’s center, the guide will pass everyone a ticket as well as an audio guide which is included in the tour fare. You will then proceed as a group for priority queue for the bus that takes you closer to the Stonehenge. The Stonehenge crew will scan you tickets before you board the bus.

The bus is quite big but gets packed up pretty soon with a capacity of 40 sitting and another 10 standing. The ride itself takes only 10 mins and you can choose to drop off in the middle to walk to Stonehenge and explore the surrounding greenery areas.

There is another short uphill stroll to the inner circle of the Stonehenge. The tour gives you close to 2 hours to explore the Stonehenge at your pace and meeting point will be back at the bus.

The start of the walking path is much closer to the stones and you can see the stones about 100 m away from you and zoom in for close up pictures but this stretch of the path is also the most crowded with tourist as everyone tries to take a picture of the stones without anyone in the background. With the audio guide, you can also listen to the explanation about the stones as well as some of the landscape surrounding the stones.

The path circles the stone and as you proceed along the path, the barricade is further from the stones so you get a full view shot of the entire Stonehenge and it also gets less crowded so you can get that perfect picture. Different viewpoint of the stones also bring different stories and explanations.

My shot at an artistic stones picture

Once back at the visitor’s center, other than visiting the Stonehenge gift shop to buy souvenirs, the ticket also enables you to visit the Stonehenge museum where there are many items found at the Stonehenge or it’s surrounding areas being displayed in an exhibition. There are many theories or written explanation on why the Stones are placed where they are and there is also a huge interactive map showing other different formations either on the ground or with stones on this same plot of land in the vicinity of the stones. Just outside the exhibition, you can see some huge stones which are the exact same kind of stones as the Stonehenge. You can see for yourself how heavy the stones are and the possible way of transporting them in ancient times.

There are also various huts being set up to show how the ancient tribes which stayed around the Stonehenge used to live and how their daily lives would have looked like. It is pretty interesting to experience how tribes lived in such small huts with low ceilings.

From Stonehenge, it is another 1hr drive to Bath and you will be given about 1.5 hours to explore the city. One of the most amazing structure in the middle of the city if the Bath Abbey which is founded in the 7th century and  former Benedictine monastery in Bath.

The interior of the abbey has wonderful structure especially the ceiling and it is worth some time exploring the various explanation points talking about the history of the church. 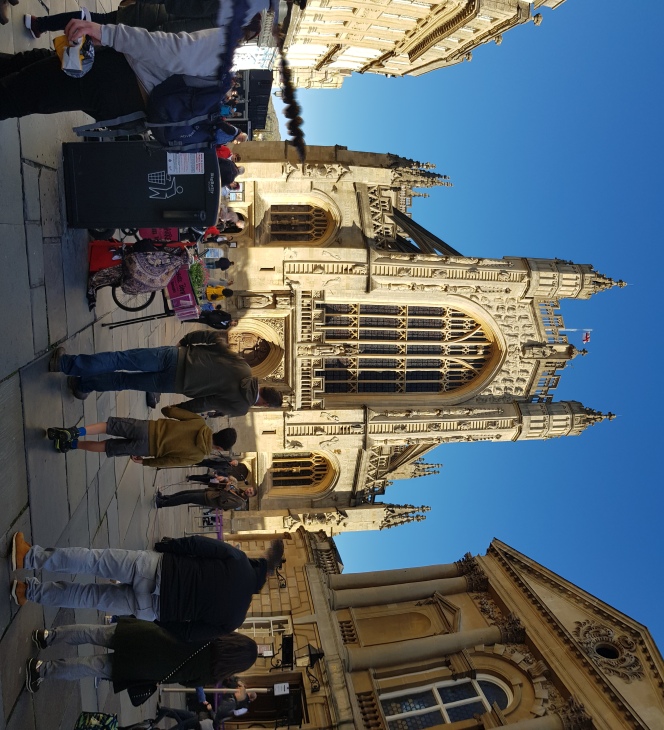 The Bath main city area is relatively small but there are various small shops residing in the historic buildings. If you are just walking around the city center, 1.5 hrs will be more than enough time for you to take some pictures and grab some quick food.

You can also take a stroll along the river and take beautiful autumn pictures.

For those interested in the ancient Roman Baths, the tour takes about 1 hour and the entry fee is at £7 and you can see how the ancient Romes partake in communal bath sessions which are considered in their times the best networking social class events. If you are touring the baths, be prepared to grab a sandwich to eat on the go as by the time you are done with the tour, it will be the time to meet up for the next location.

The next location on the tour is Lacock which is another 45 mins drive away from Bath. Lacock is a village and civil parish in the county of Wiltshire, England, about 3 miles south of the town of Chippenham. The village is owned almost in its entirety by the National Trust and attracts many visitors by virtue of its unspoiled appearance. ( Source Wikipedia)

With its central grid of four streets, Lacock today looks much like it did 200 years ago. It’s oldest house is older than the thirteenth century abbey. Today the village is very much driven by tourism as the village is filled with small stores like bakery, souvenir shops, restaurants and cafe.

The village is so picturesque that it is no wonder it is the setting of many films like one of the episode in the Harry Potter movies. The fact that the village did not change makes it very easy for filming it as the setting of a very ancient time. The entire tour of Lacock is only about 30 mins on foot with the guide as he will explain all the details of the village, the cathedral as well as point out which are the oldest houses in the village.

On route to the last location, the guide will point out this white horse that is engraved into the hill. He will even stop the bus for those who would like to take a clearer picture. The Westbury or Bratton White Horse is a hill figure on the escarpment of Salisbury Plain. The horse is 180 feet (55 m) tall and 170 feet (52 m) wide and has been adopted as a symbol for the town of Westbury. There are still various debates on the origin of the horse.

By the time you reach the last stop of Avebury, it would be close to sunset and you can see the stones in the beautiful orange glow. While the stones are not placed in style in the Stonehenge, the stones here are scattered all around in a more artistic manner.

There are no barricades at Avebury so you can really touch and feel the stones up close. The stones are perhaps smaller than the ones at Stonehenge but is as wonderful to look at. There are stones all over Avebury but only 2 plots of land where they are more concentrated.  The stop here is pretty short depending on how punctual your tour group is throughout the day. We had quite a few latecomers so we had to rush through the last 2 stops to make sure we make it back to London before 9 pm.

The guide is usually flexible on drop offs and would find out from the tour where they stay or where they would prefer to drop off. Due to traffic, the drop offs are usually not in city center but would be at one of the more accessible stations with connections to many lines. Tips is not compulsory but it would be nice to tip at least £5 ( for 2 pax). Generally I feel that the tour is quite worth the cost as we visited 2 sites which is uncommon in other tours and the service of the guide is pretty good and still felt personal as the group size is not too huge.