Being a typical middle-aged traveller who is used to the modern clean and hygienic facilities of most developing countries, I have to admit that India has never been on my travel list. With crazy reports of rape cases and severe unsafe reports for female travellers, the country was all the more moving down the travel list. There is however 1 thing that tugged at my heartstrings and that is the Taj Mahal. Other than being 1 of the Wonders of the World, I have longed heard so much about the beauty of the Taj and it has secured a space in my bucket list.

As I start the next decade of my life, I jumped on the opportunity to join my friend on her travel plans to India and convinced her to revisit the Taj Mahal with me. With a friend who has been to India before, I was less anxious on the trip. We arrived in New Delhi at night around 8 pm and the airport was really crowded. Pre-warned about the air pollution in India, I was equipped with my mask and when I exited the arrival halls, the air was indeed bad.

It is also in my opinion, a bit chaotic as many people will try to get you to take their transport to your hotel. You will have to make your way past these people to get to the official taxi stand. The official taxi stand will have a bright yellow sign and it is usually crowded with tourists. Even when you queue up at the stand, many other people will still try to get you to take their transport by asking you about your location and quoting you their prices. Many times, some of these people try to take your luggage and lead you to their car. My advice is to hold onto your luggage at all times and ignore these people or just say No firmly. 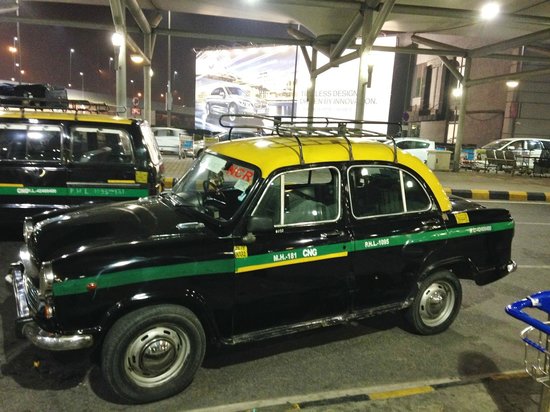 Once you pay for your ride, the taxi stand will issue you a receipt where you can bring to one of these yellow top black taxis where they will check the destination before accepting your trip. Do note that not all taxis would take your destination and also not all of them speak English especially if you are coming from the domestic terminal.

The ride from the airport to downtown took about 35 to 45 mins and depending on if your taxi decides to take on another passenger. Our driver decided to take on an additional passenger whose destination is on route to our hotel which extended our journey by another 15 mins. The next morning, we started the day very early around 9 am and our guide and driver picked us up in one of these white vehicles.

There was not much I wanted to see in Delhi and we only had a couple of hours before we started our drive down to Agra for Taj Mahal visit. Our first location was the Qutub Minar which was a is a minaret and “victory tower” that forms part of the Qutb complex, a UNESCO World Heritage Site. As our tour does not include entry fees to the sites, we had to get our own from the ticket booth.

The booth is located at the entry and you can queue up at the foreigner line which is shorter than the local lines but the cost is also higher at 600 rupees versus 40 rupees for locals. Visa card payment is accepted at the booth and you will be handed a receipt and these blue tokens for entry

At the entry, there is a separate line for foreigners and locals where the foreigner line is visibly much shorter. There is also a short bag check for security reasons. The entire site consists of the Quwwat Ui Islam mosque which is in ruins as well as the main Qutub Minar tower.

The mosque was completed in 1197 and is the first mosque to be built in India. An inscription over its eastern gate provocatively informs that it was built with material obtained from demolishing 27 Hindu temples (Source Wikipedia)

Apart from the Qutb Minar and the Quwwat ul-Islam Mosque, other structures in the complex include the Alai Darwaza Gate, the Alai Minar and the Iron pillar. The adjoining area spread over with a host of old monuments, including Balban’s tomb, has been developed by the Archaeological Survey of India (ASI) as the Mehrauli Archaeological Park, and INTACH has restored some 40 monuments in the Park ( Source Wikipedia)

The origins of Qutab Minar are shrouded in controversy. Some believe it was erected as a tower of victory to signify the beginning of the Muslim rule in India while others say it served as a minaret to the muezzins to call the faithful to prayer.

The tower has five superposed, stories. The lowest three comprise fluted cylindrical shafts or columns of pale red sandstone, separated by flanges and by storeyed balconies, carried on Muqarnas corbels. The fourth column is of marble and is relatively plain. The fifth is of marble and sandstone. The flanges are a darker red sandstone throughout and are engraved with Quranic texts and decorative elements. The whole tower contains a spiral staircase of 379 steps. The tower tilts just over 65 cm from the vertical, which is considered to be within safe limits. (Source Wikipedia)

We spent about 1.5 hours within the compound as it is not really huge and if you do not have any guide, it can be viewed pretty fast. There are many open spaces and areas around the compound so you can also choose to sit and enjoy the view. There are also many people who would willingly want to help you take your pictures and some of these people are the guards patrolling the area. The exit is a different gate from the entrance so our driver picked us up from the exit

Our next stop was the Lotus temple is a Baháʼí House of Worship that was dedicated in December 1986. The building is composed of 27 free-standing marble-clad “petals” arranged in clusters of three to form nine sides, with nine doors opening onto a central hall with a height of slightly over 34.27 metres and a capacity of 2,500 people.

The lotus temple is located within a huge plot of land and is currently nicely maintained as a beautiful garden. There is a designated walkway which is well paved and kept very clean. Once you reach about 200 metres from the temple, you will find these volunteers passing to visitors white bags to carry their shoes. Everyone is expected to take off their shoes on the last stretch before they reach the stairs to the temple.

This was the closest view I got of the temple since I decided not to enter the temple; partially being tired and lazy.

Photos were not really permitted within the temple so I managed to get some from Wikipedia. You can see the intricate patterns of the roof where the many petals meet right at the top.

The interior walls of the temple form a very beautiful image and it is no wonder that the Lotus Temple has won numerous architectural awards and has been featured in many newspaper and magazine articles. The surface of the House of Worship is made of white marble from Penteli mountain in Greece, the same marble used in the construction of many ancient monuments. Along with its nine surrounding ponds and gardens, the Lotus Temple property comprises 26 acres.

Interesting information that I picked up while speaking to an Australian volunteer who was a believer of the Baháʼí Faith. He mentioned that when the first architecture drawings were sent to the US for review, most of the feedback was a cynical laugh that the building can never be stable and would not be possible especially in India where their technology in architecture was deemed inferior to the Western powers. Fast forward to today, the Indians have the last laugh as the Lotus Temple is one of the most visited buildings in the world for its architectural beauty. I also learnt that there are further plans to develop the surrounding land to include schools and senior homes to give back to society. We spent at least an hour here to fully appreciate the building.

Our final site was the India Gate which is a war memorial formerly called Kingsway. It stands as a memorial to 70,000 soldiers of the British Indian Army who died in between 1914–1921 in the First World War. The entire stretch of the street is very popular for tourists as well as locals so there are various small stalls selling beverages and snacks. There is also a march during their Independence day and many locals will come by here to watch the march.

The India gate is similar to the architectural style of other triumphal arches such as the Arch of Constantine, in Rome, and is often compared to the Arc de Triomphe in Paris. A lot simpler, the majestic monument is 42m tall and built on a low base of red Bharatpur stone. Names of over 70,000 Indian soldiers are inscribed on the walls of the monument in whose memory it is built. There are over 300 steps that take you right to the top of India Gate but special permission needs to be applied to the government.

We had a very quick stop here before we moved on to our next location, Agra which was a 4-hour drive away from New Delhi.

One of the more famous and popular hotel in Singapore for tourists and locals, the MBS hotel completes the beautiful skyline. Read on for the full review
One year has past without travelling. Looking back on these precious memories and hoping the day will come soon when I can step on foreign lands again to create new memories. #throwback #misstraveling #elizbeartravel #wanderlust
When you can't travel for Christmas, lights on display does gives a similar cheer.
Time for some shake shack.. look out for the review
Check out my first attempt at making and editing a cooking video.. subscribe to my channel as I hope to add more videos to the channel
Missing days of travelling and having gorgeous meals like this
×
Loading Comments...
%d bloggers like this: